Shine has been very busy this season, creating custom, hand-crafted displays for our partners all across Southern California. We’ve highlighted a few of our larger displays built for a night of fun for for everybody with multiple one-of-a-kind photo opportunities that are sure to create unique memorable images for you to share this holiday season. So whether you want to see reindeers in training, or giant Santa bobble-head, or a Christmas tree made of surfboards and put to a musical light show, we’ve got you covered in holiday cheer!

Dana Point Harbor has been at the heart and soul of Shine Illumination over the last 5 years and it gets better every year.  What once was just an afterthought has turned into one of the most visited displays in Orange County. The harbor has once again transformed in a holiday adventure of lights.  Get there as soon as you can to experience all the harbor has to offer to this year. 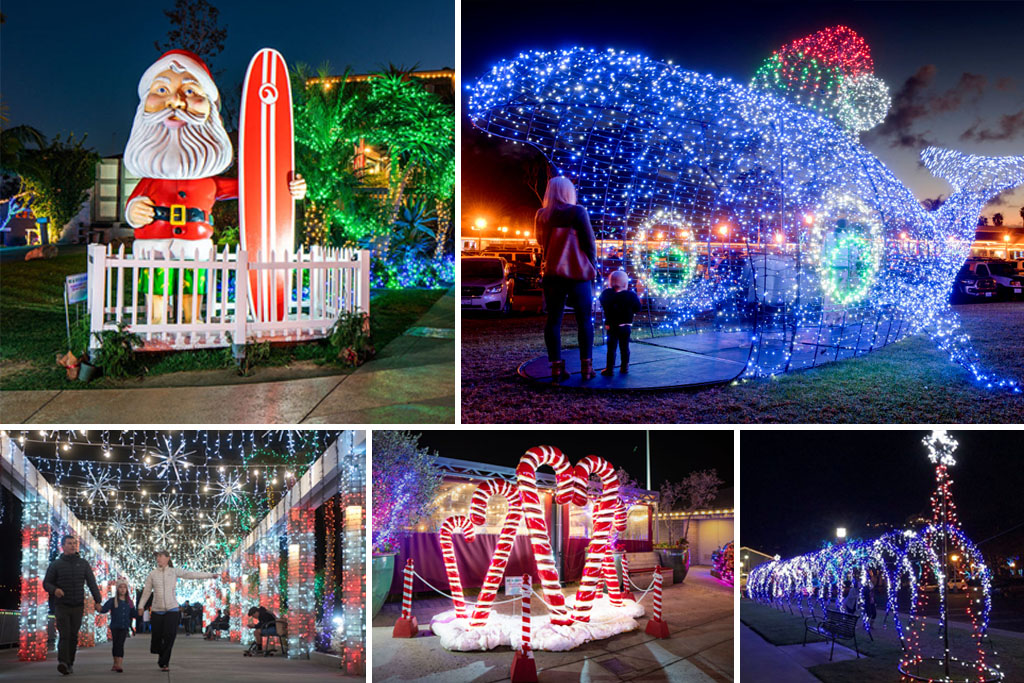 Menifee has become Santa’s new training facility for his reindeer-in-training, called “Hoof Camp”. Reindeer are practicing roof landings, pulling weighted sleighs, and being trained by giant snowmen (great trainers, by the way). From Christmas trees with antlers to giant snowflake gardens, Menifee Countryside Marketplace is a spectacle of holiday fun, sure to make memories with anybody and everybody you bring with you.

Come watch the 40′ Christmas Tree made of surfboards come to life with a light show put to music.

Del Mar Highlands Shopping Center has hit another a new high, with its one of a kind 40′ surfboard Christmas tree. Santa obviously thinks pretty highly of it and it’s musical light show, because he came surfing down from the North Pole in his board shorts just to check it out. Delmer, the local Penguin, is still chillin’ by his igloo welcoming all visitors to walk through his igloo, and you can visit the 15′ surfing snowman for a quick pic along the way.

Come check out Del Mar and post your pics with #TisTheSeaSun. Come see for yourself how the shopping center was transformed into a beach themed arctic paradise and has become a holiday ‘must see’!

San Diego has always been a hot bed of activity, and Belmont Park has always been right at the center of it all, and this Holiday Season is no exception. Whether you’re getting your picture taken hanging ten with a giant snowman, or working out with his friend lifting candy cane barbells, there’s plenty to see and do at Belmont  Park. You can get your picture taken under the patented MerryKissMe® sign, suspended by giant candy canes, or even surf your own wave with somebody special under the mistletoe. Come see why Belmont Park has once again placed itself at the center of San Diego’s Winter Wonderland.

One of the most famous piers in one of the most famous cities, Santa Monica Pier attracts thousands of thrill seekers all year long. And this year, Shine Illumination is honored to contribute to the holiday festivities by adding a patented Merry Kiss Me® display. Take pictures with friends, family, partners and everybody else under this viral holiday themed display, and share them with everybody. Let them know that you were a part of one of Southern California’s holiday hot-spots.

Get A Quote Today